Testing my artistic skills B-)

Hej, alla (Hello, Everyone in Swedish)

Hey Guys :) This week, I was put in charge of creating the graphics for the storyline of our game! This was quite fun for me and surprisingly I encountered some obstacles! Before I share the obstacles I had to overcome, I will the first graphic users will see upon playing our game! 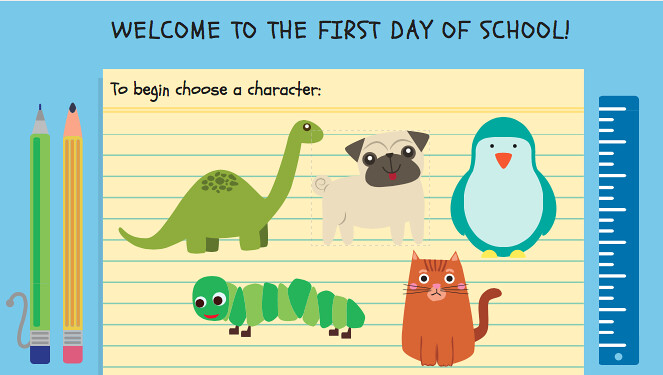 Now, I quickly discovered was that it was hard to find a free software to create graphics for a game. Many graphic software’s offered free trials and I thought of using them but remembered that after the trial period is over, that those images belonged to them. So to avoid any legal problems…I went in search for other ways to create graphics. As I mentioned two blogs ago, a professor at the SIGCSE Conference shared with me that I could use sketch, however that software was not avaliable to me.

For the time being until I fond a solution, I tried paint and then found my trackpad drawing skills look like scribbles. So I knew that I really did need a software that was accessible to me to complete my part of the project for the week. Time went by and I found that clipartwas going to be my substitute until I found something else. I used clipart to create the backgrounds and they also had a library of characters that were for free.

In our weekly meeting, I addressed these obstacles and my faculty advisor said that a game design professor at our school had a downloadable software that I could use for graphics because I am a student at Kennesaw State.

This coming week, I will be recreating the graphics I had done in canva and do them on this software. In addition, I will continue to work on Hopper’s Fables platform.

I learned this week that creating graphics for a game is hard. During my research to find a graphic software, I came across a tutorial that demonstarted how to code graphics using OpenGL and WebGL, which I found quite interesting. This process to create graphics this week really shed light to those in game development! In addition, I learned that to make our graphics “move”, I need to make different “shots” of the characters, for example, to make them seem like they are moving (similar to a giphy). And they way they would move is through the code going back and forth between the two different “shots” of the character, therefore making it seem like it is moving. I will also be focusing on doing this part.